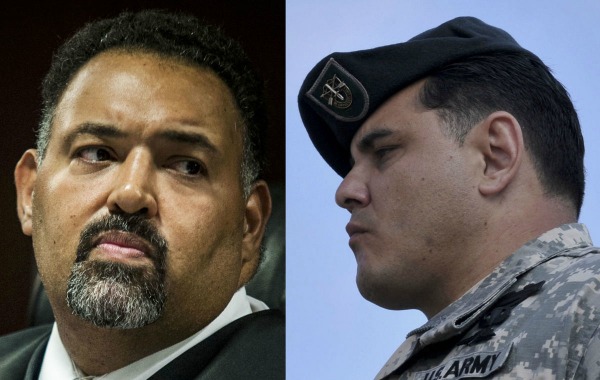 Here’s how it’s done: A North Carolina judge – and veteran – who sentenced a three-tour, PTSD-afflicted veteran to 24 hours in jail for a DUI offense, and noted how the offender trembled at sentencing, served the time with him. Judge  Lou Olivera, 45, a Gulf War veteran who presides over an innovative Cumberland County veterans’ court, had sentenced Joseph Serna to a 24-hour jail stint after Serna admitted he’d lied about an urinalysis test. A married father of seven and Special Forces Green Beret sergeant who served three tours in Afghanistan, Serna has appeared multiple times in Olivera’s court as he struggles with sobriety. 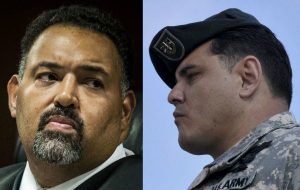 When Serna showed up for his jail time, he was met by the judge explaining, “We’re going to turn ourselves in.” They spent the night in a single cell – Olivera gave him the bed and slept on mats on the floor – talking about their families and military service, Serna’s three tours in Afghanistan, the friends he lost and the injuries he suffered, “our dreams for us and our families, and the road to take us there.” A moved Serna said of the judge, “He stepped in there for me. I will never let him down again.” As for Olivera, he cited a story he’d read: “It talked about a soldier with PTSD in a hole. A family member, a therapist and a friend all throw down a rope to help the veteran suffering. Finally, a fellow veteran climbs into the hole with him. The soldier suffering with PTSD asks, ‘Why are you down here?’ The fellow veteran replied, ‘I am here to climb out with you.’”

This website uses cookies to improve your experience while you navigate through the website. Out of these, the cookies that are categorized as necessary are stored on your browser as they are essential for the working of basic functionalities of the website. We also use third-party cookies that help us analyze and understand how you use this website. These cookies will be stored in your browser only with your consent. You also have the option to opt-out of these cookies. But opting out of some of these cookies may affect your browsing experience.
Necessary Always Enabled
Necessary cookies are absolutely essential for the website to function properly. This category only includes cookies that ensures basic functionalities and security features of the website. These cookies do not store any personal information.
Non-necessary
Any cookies that may not be particularly necessary for the website to function and is used specifically to collect user personal data via analytics, ads, other embedded contents are termed as non-necessary cookies. It is mandatory to procure user consent prior to running these cookies on your website.
SAVE & ACCEPT